The History of Porepunkah Primary School

In 2023 Porepunkah Primary School will celebrate 150 years of education in Porepunkah.  We recognise that we currently sit on Dhudhuroa Country and proudly acknowledge the elders who cared for this land in the past, in the present and into the future.

Land for the Porepunkah Common School was acquired from William Hooper and the school was officially opened on 23 January 1873, with Henry Jeffreys as the headmaster and an enrolment of 43 children.  Between 1910 and 1915 a new building was built and in 1941 it was moved to a more convenient location and renovated.

The first school committee was formed in 1911. In 1924 they acquired more than 40 acres of Crown Land for a School Endowment Pine Plantation. The first acres were planted in 1925. They were milled in 1955 and the school received a cheque for 750 pounds. Another classroom was built that year.

In 1963 another classroom and an office and storeroom were built.

During 2010-2011 the school underwent a major redevelopment. The original classroom and the 1963 development were retained and four new classrooms, toilets and a large multi-purpose/library space were added.

The original schoolroom was used as an Outside School Hours Care room until 2021 and is now our proud Foundation classroom, educating the next generation of little learners.

We look forward to welcoming past and present staff, students, parents back to Porepunkah Primary School in 2023. 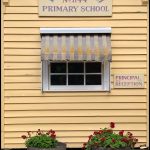